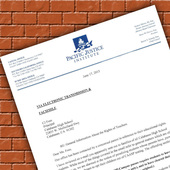 Los Angeles, CA–Attorneys with Pacific Justice Institute are warning a principal in Southern California to drop her attempted retaliation against families who opted out of testing under the controversial Common Core State Standards.

California allows parents to exempt their children from statewide assessments, known in the state as CAASP.  Due to a wide range of concerns about common core and the new tests aligned with it, some communities recently saw high percentages of parents exercise their statutory right to opt out.  By some estimates, 75% of high school juniors at Calabasas High School in western Los Angeles County opted out of the CAASP tests.

The high numbers of parents exercising their rights has not sat well with some administrators.  In an e-mail to parents sent Tuesday afternoon, Principal CJ Foss of Calabasas High School claims, “Senior activities, parking, and off-campus passes require students to have participated in the CAASP testing (seniors only)…”

The principal’s attempt to punish incoming seniors with loss of parking and other privileges for exercising their rights is infuriating parents, who reached out to PJI.  On Wednesday, PJI Senior Counsel Michael J. Peffer fired off a letter to Principal Foss demanding that the illegal retaliation be rescinded immediately.

Brad Dacus, president of Pacific Justice Institute, commented, “A principal absolutely cannot punish students because their parents exercised their legal rights.  We have now seen a number of educrats pretend as though these opt-out rights do not exist, but this is a new low.  We are taking aggressive action to ensure this brazen attempt to deny parents’ rights is stopped in its tracks.”

Court Strikes down School’s Ban on the Constitution, Bible Tracts