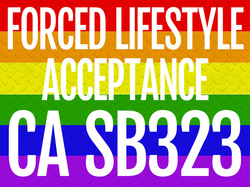 Sacramento, CA – A new bill introduced this week in the California Senate would take some of the most aggressive action to date to force youth organizations to embrace homosexuality and “gender identity.”

SB 323, sponsored by Equality California and introduced by Sen. Ricardo Lara (D – Long Beach) threatens to revoke tax exempt status for a wide range of “youth groups” unless they agree to abandon any criteria related to gender identity, sexual orientation, religion, and other categories.

The bill was designed to pressure the Boy Scouts to accept homosexuality, but its sweep goes much further. The bill specifically targets groups ranging from the Scouts to Special Olympics, Little League, Pop Warner, 4-H, Future Farmers of America, as well as youth sports in general. It also references private schools and “youth groups.”

Attorneys with Pacific Justice Institute are assessing all the potential implications of SB 323 and will be vigorously opposing it. “From the plain text of this bill, it is clear to us that SB 323 is one of the most outrageous bills we have seen in California—and that’s saying a lot,” said Brad Dacus, president of Pacific Justice Institute. “We have been warning for years that the gay lobby would eventually use tax exemptions to force non-profits to capitulate to their demands, but it’s still shocking to see it actually in print and on its way to becoming law.”

Because SB 323 would have the effect of a massive tax increase on non-profits that stand by their principles, it requires 2/3 approval in both Senate and Assembly. This higher threshold makes it even more important that Californians call and visit their legislators to protest. PJI will provide updates throughout the legislative process.